Day three of Aerification could be coined a day playing in the sand.... 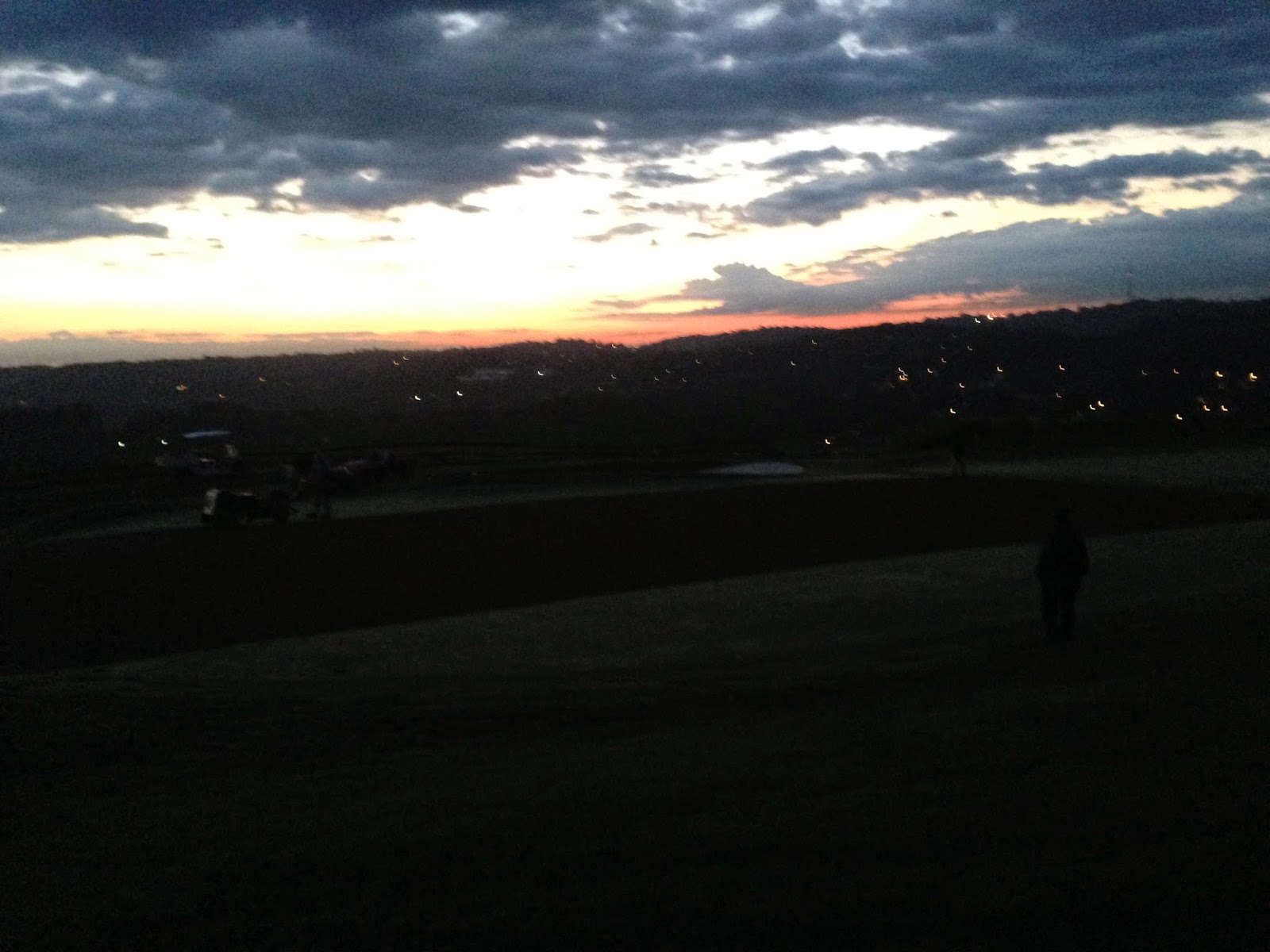 The day started at daybreak as we finished the remaining greens that needed to be aerated.  Holes 15-18 were poked and cleaned prior to lunch with a small crew. 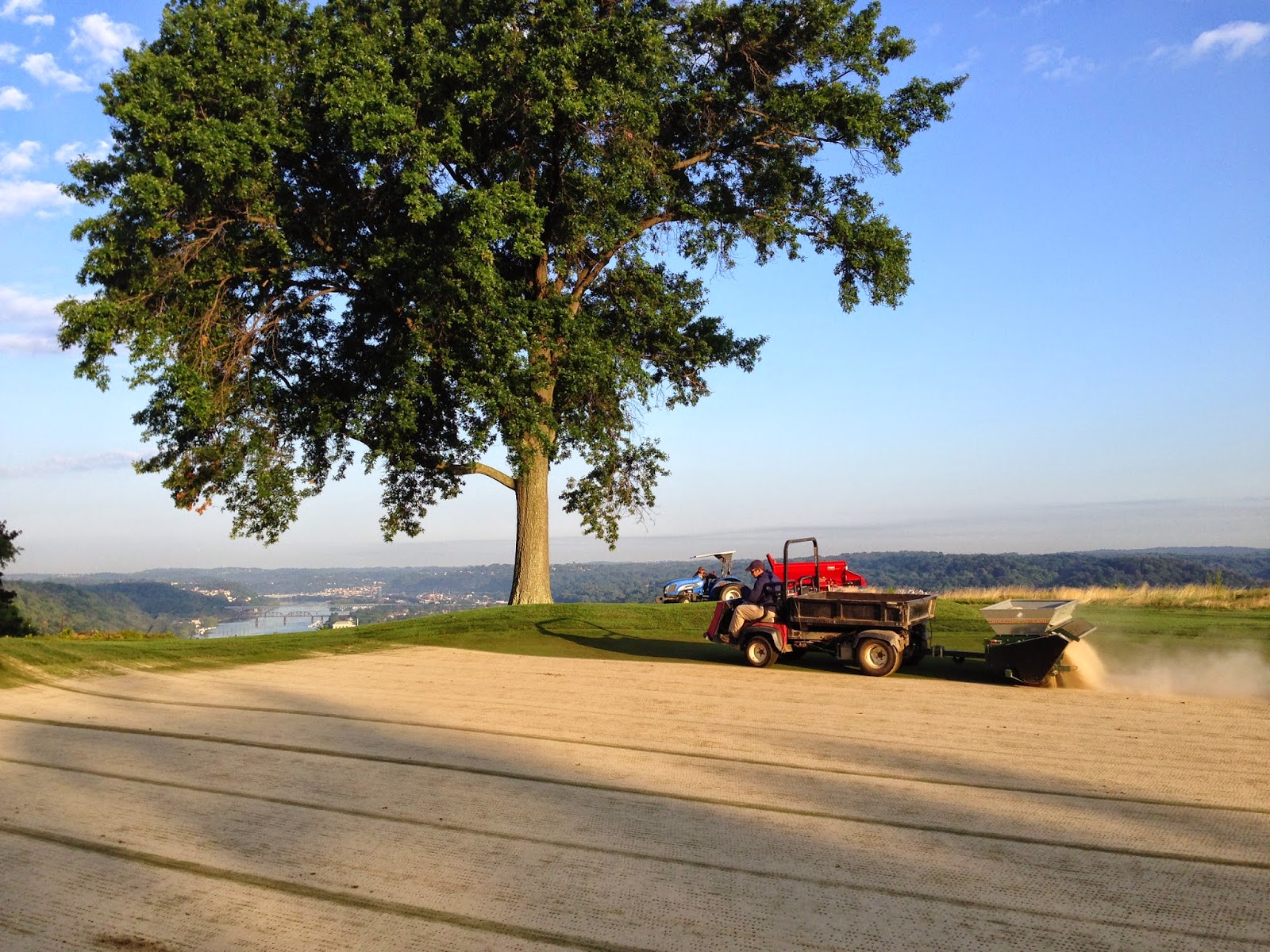 We then began the process of topdressing. 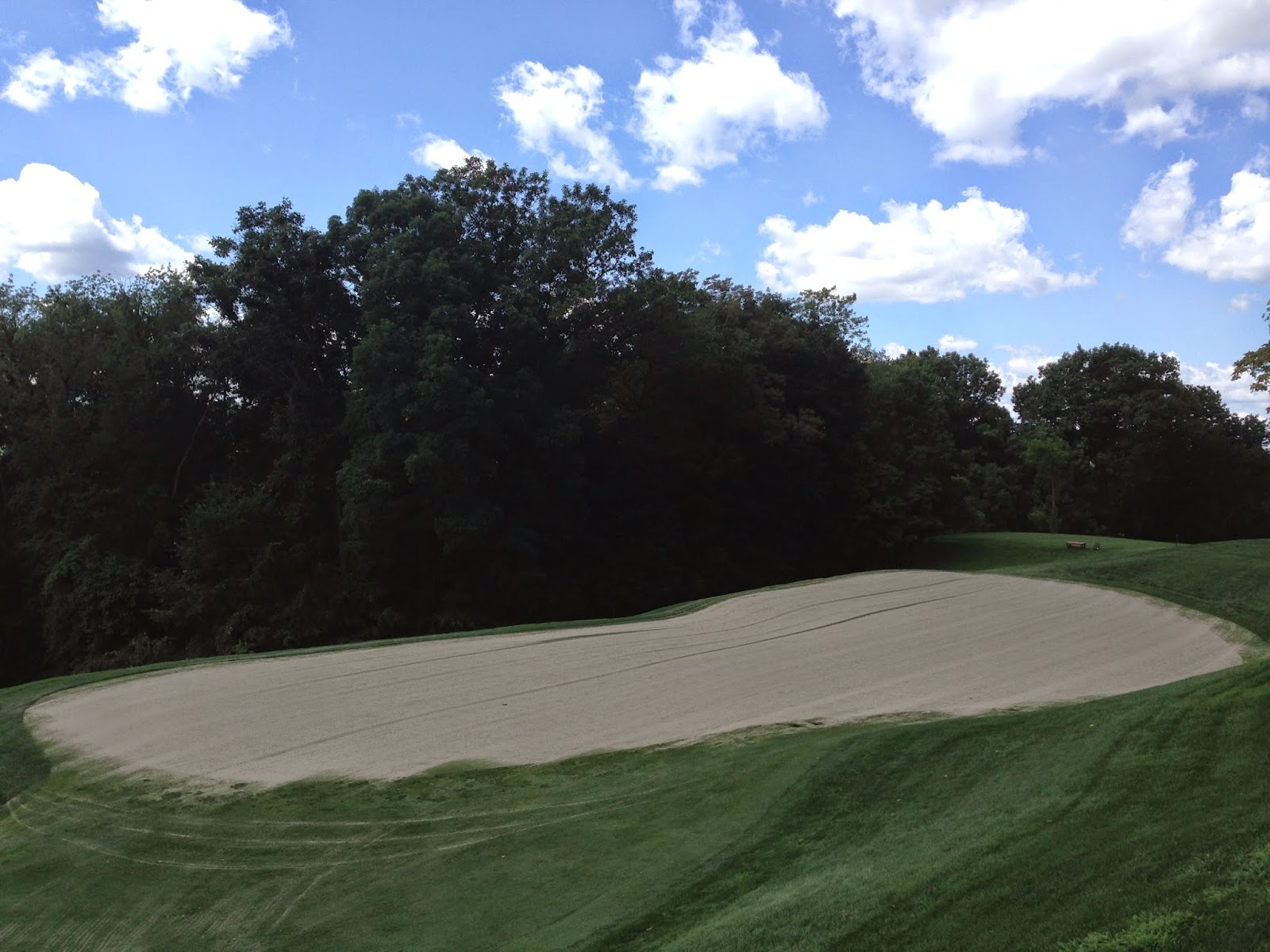 This is a view of #3 following Max burying it in sand. 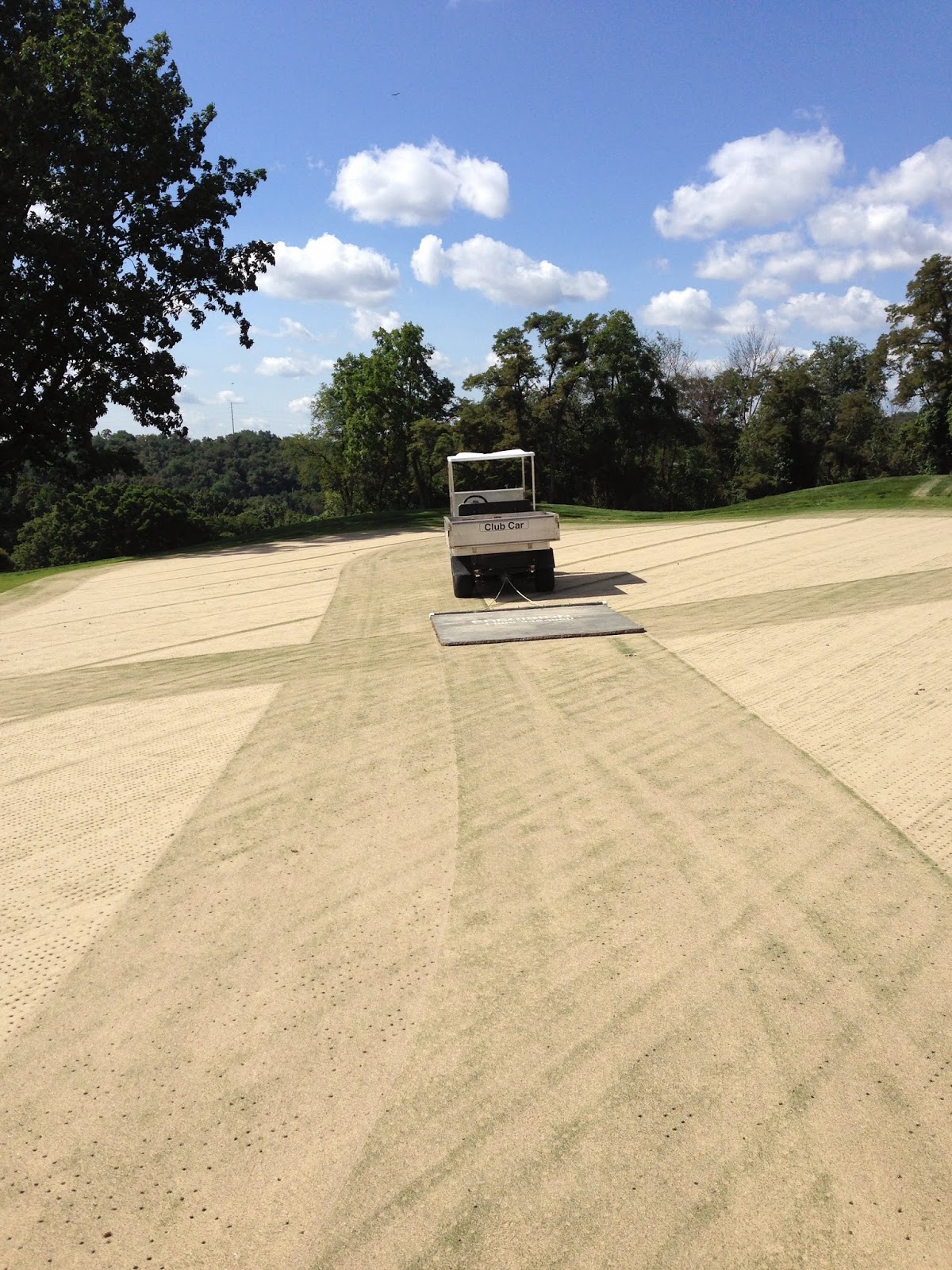 Then I followed in behind with a Coco fibered drag mat to work the sand into the holes and canopy. 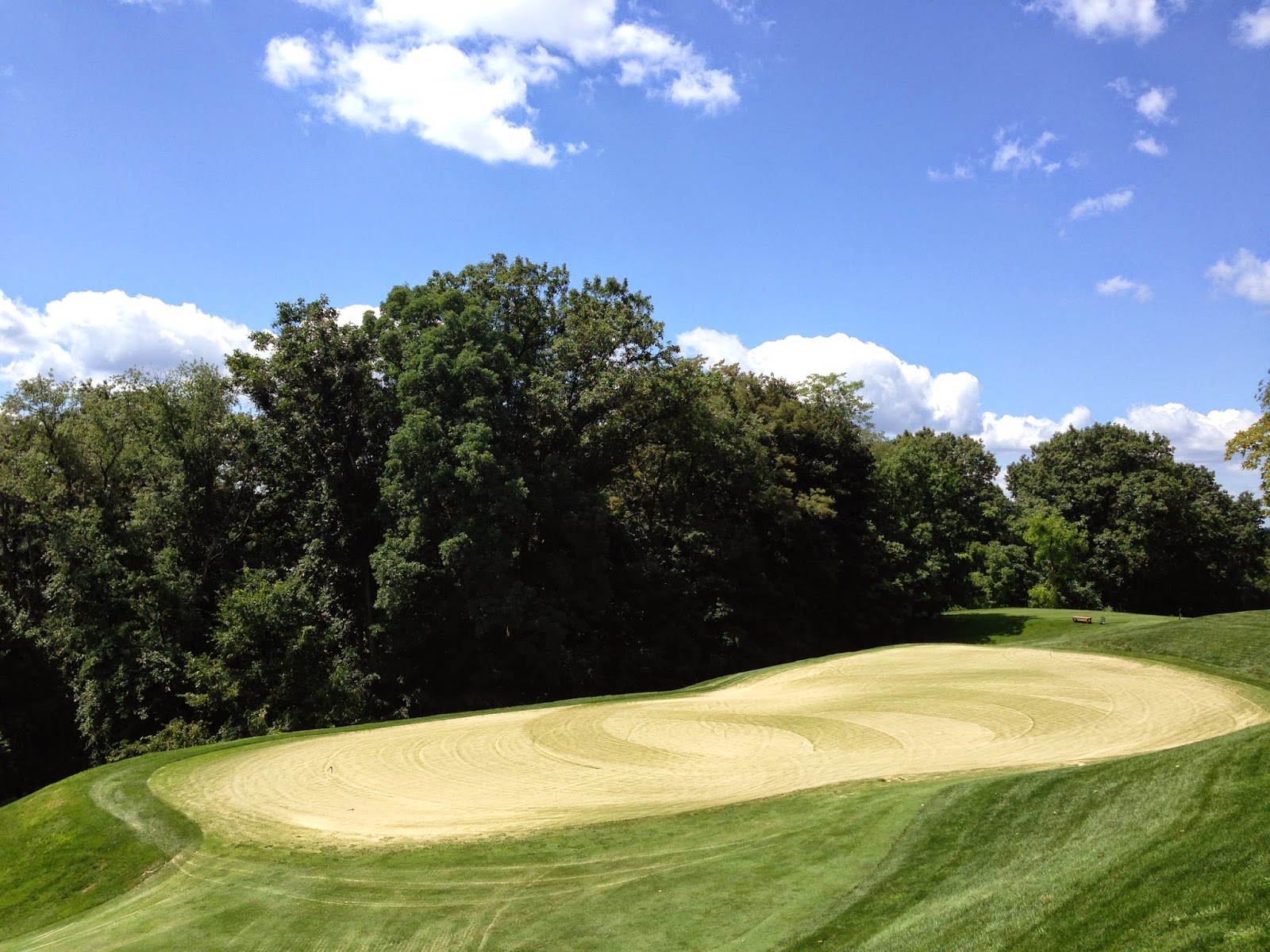 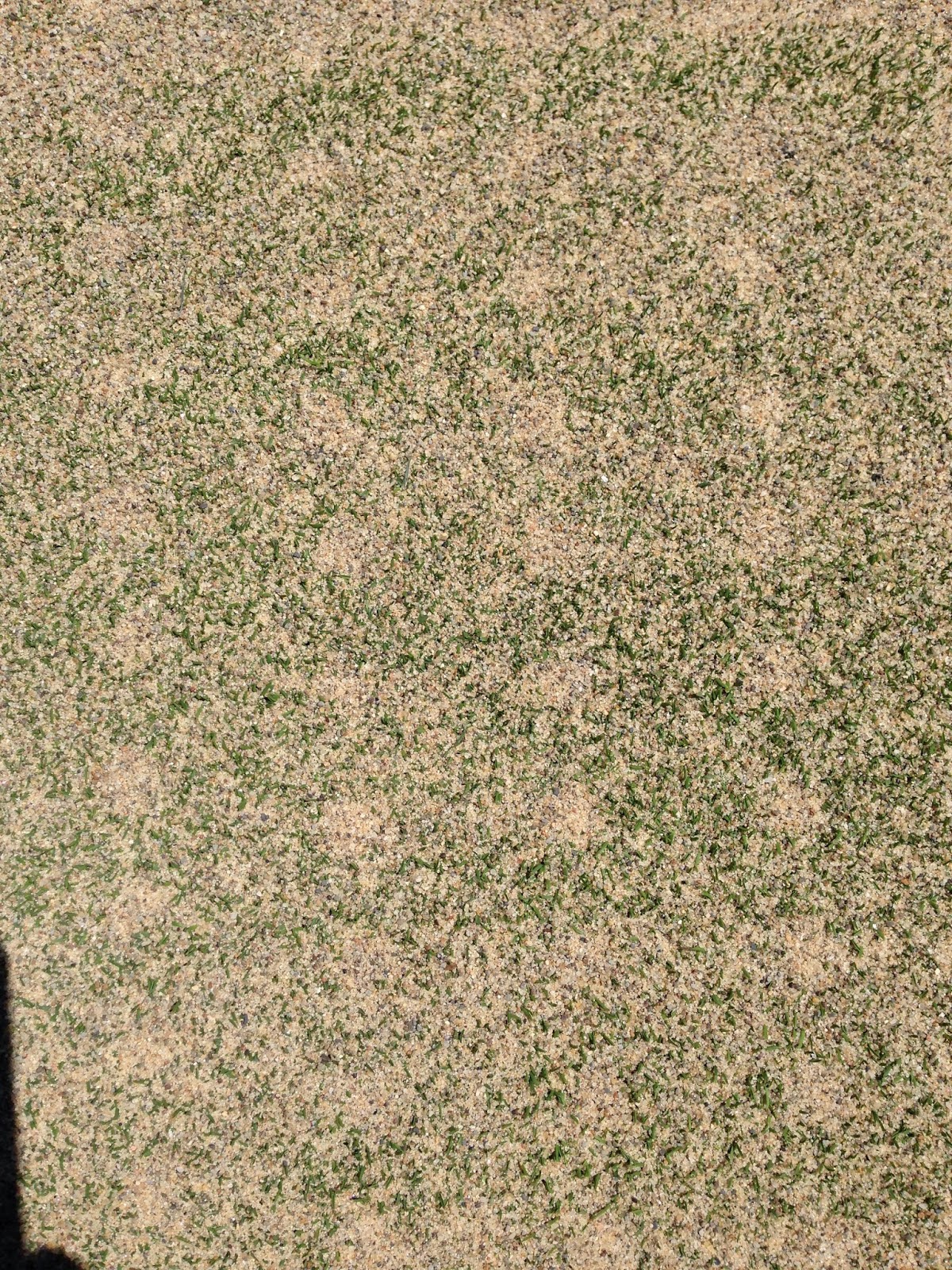 ﻿
﻿
﻿
Close-up view of the finished product 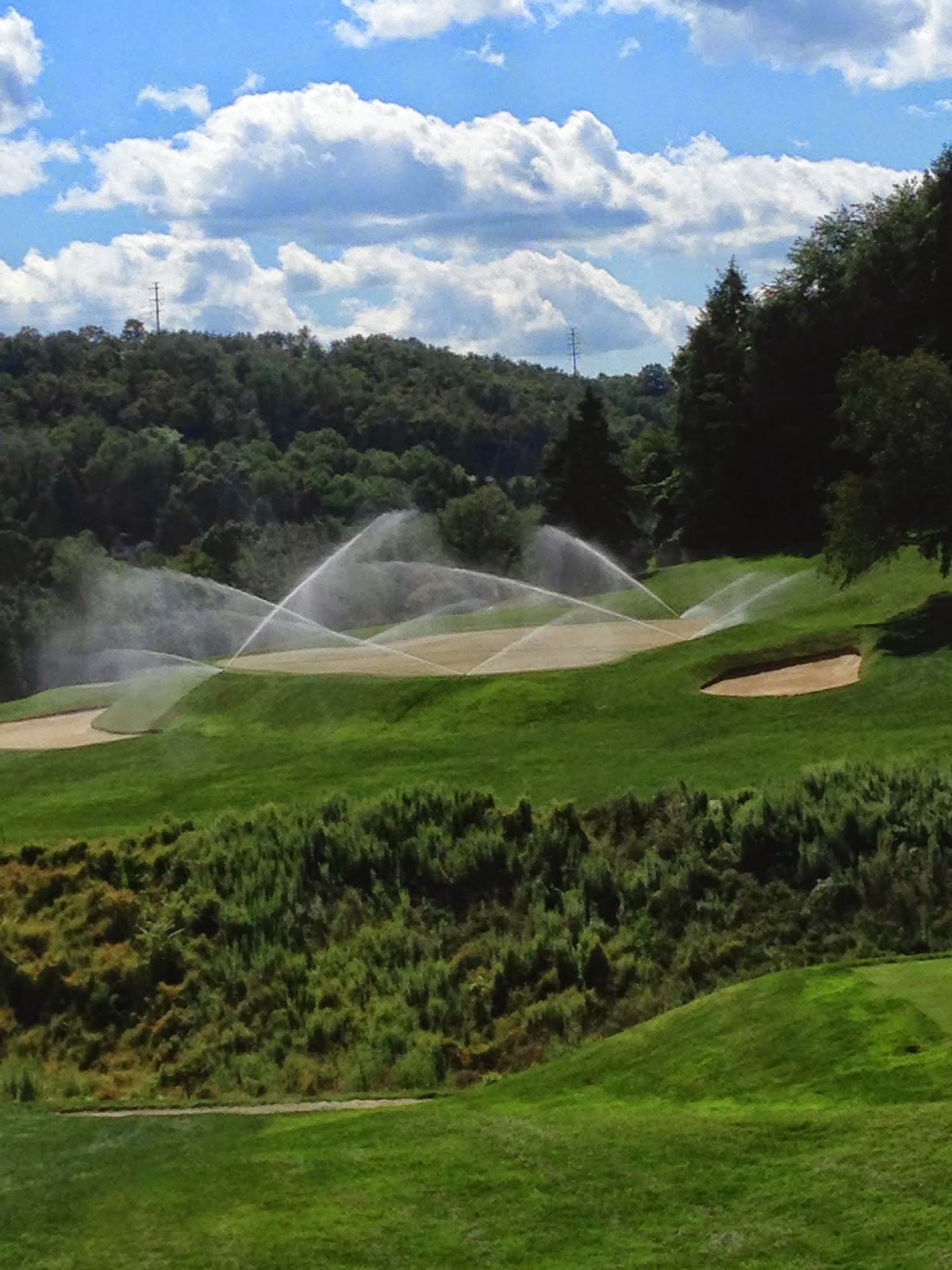 Final step is that I make it rain!  Beginning the process of beating the sand down into the canopy. 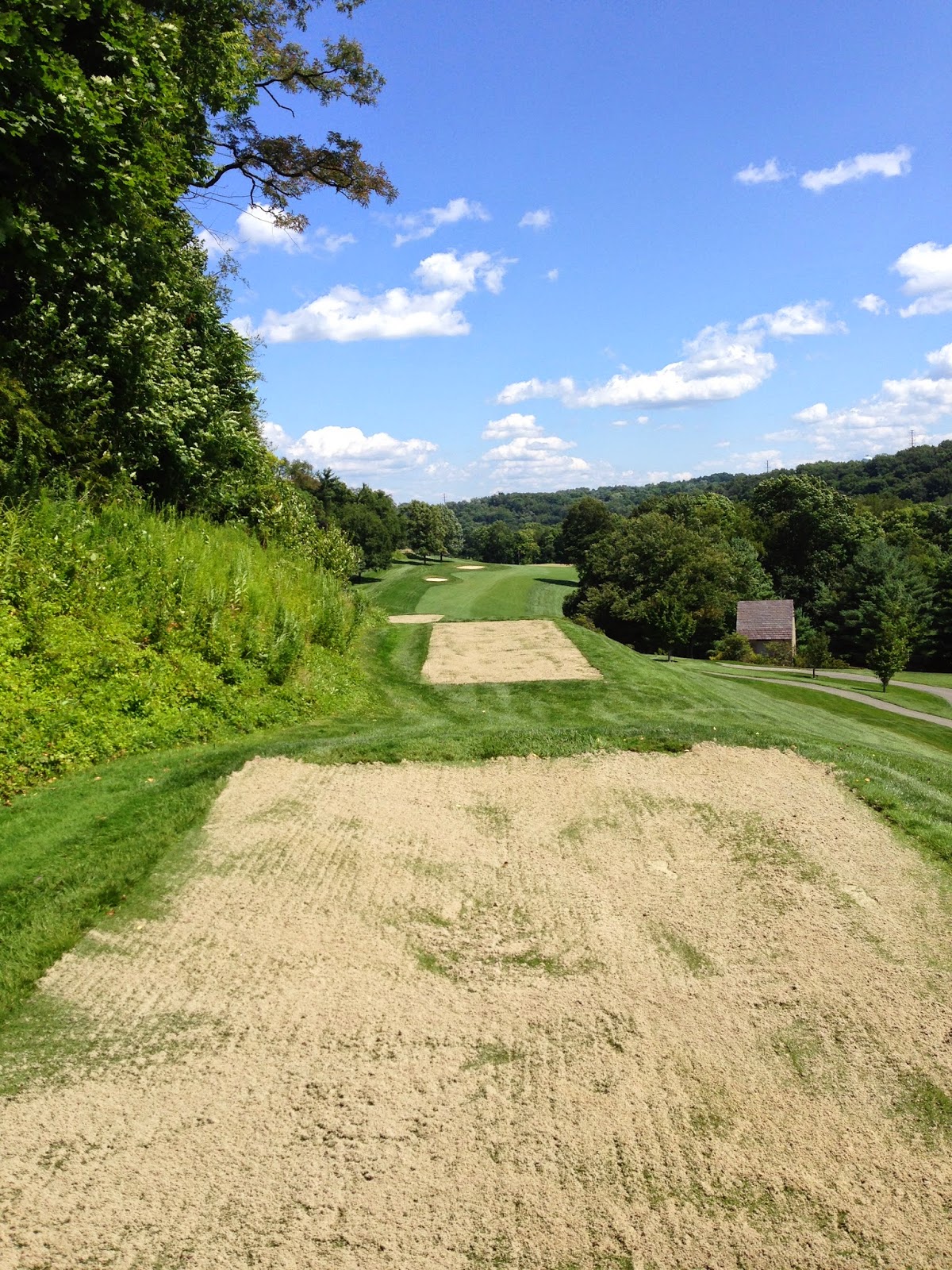 ﻿
Throughout the day, we also had a team topdressing tees. 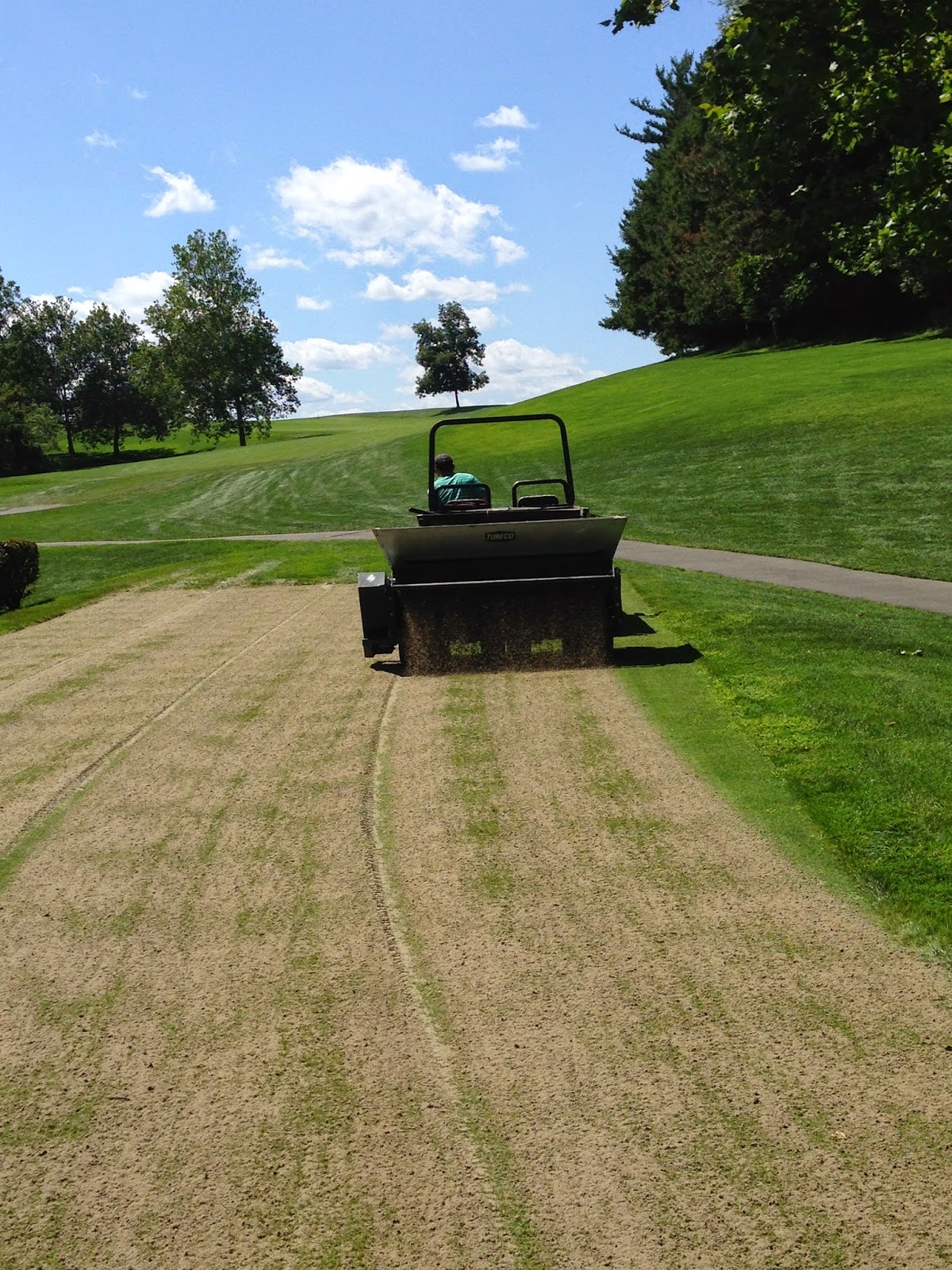 The process of topdressing tees was extremely time consuming and took over half the staff the entire day.  Some we were able to get the mechanical topdresser on. 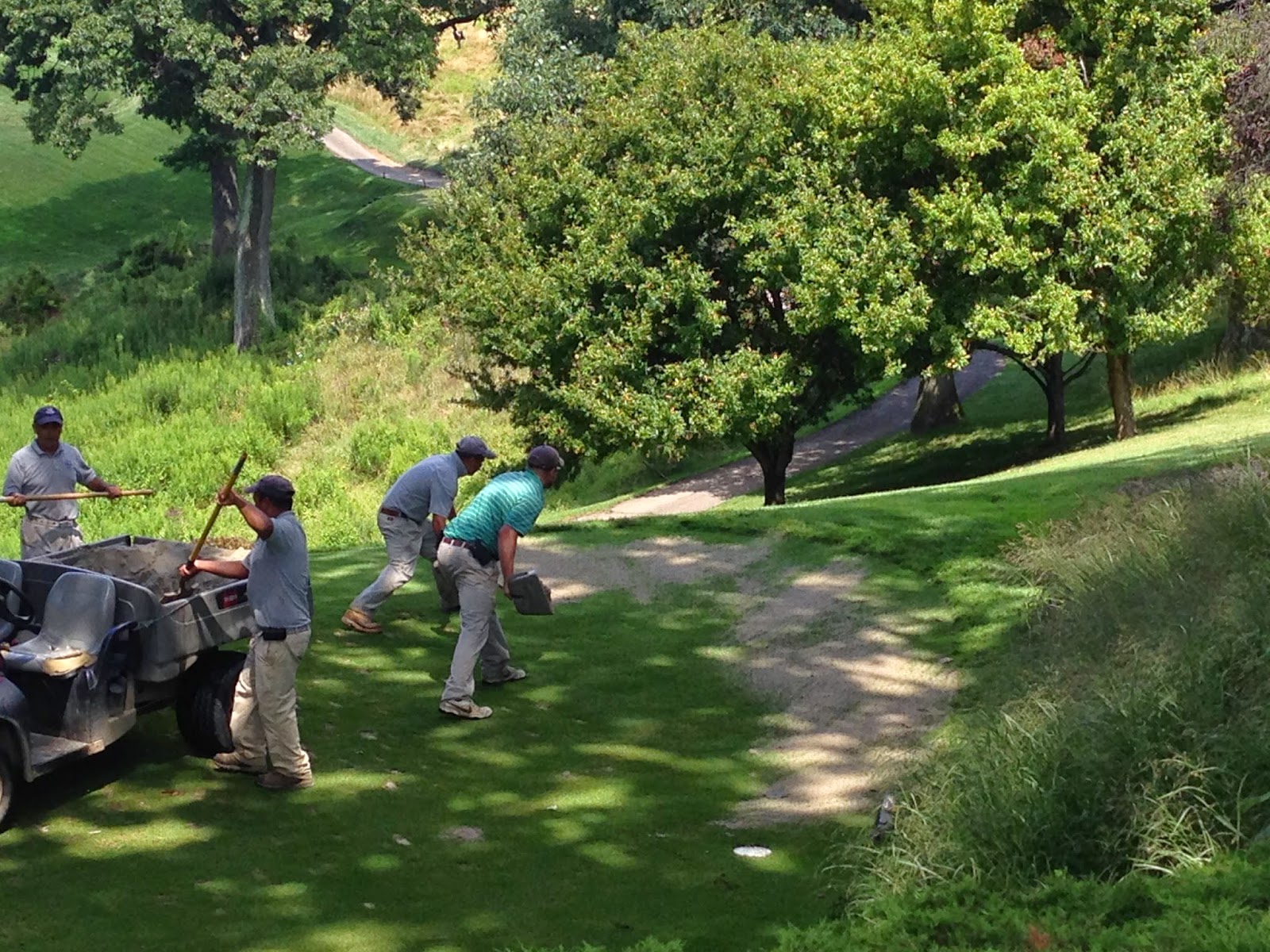 Others we had to go the old fashion route due to the terrain surrounding the tees wouldn't allow the topdresser to perform safely.
﻿ 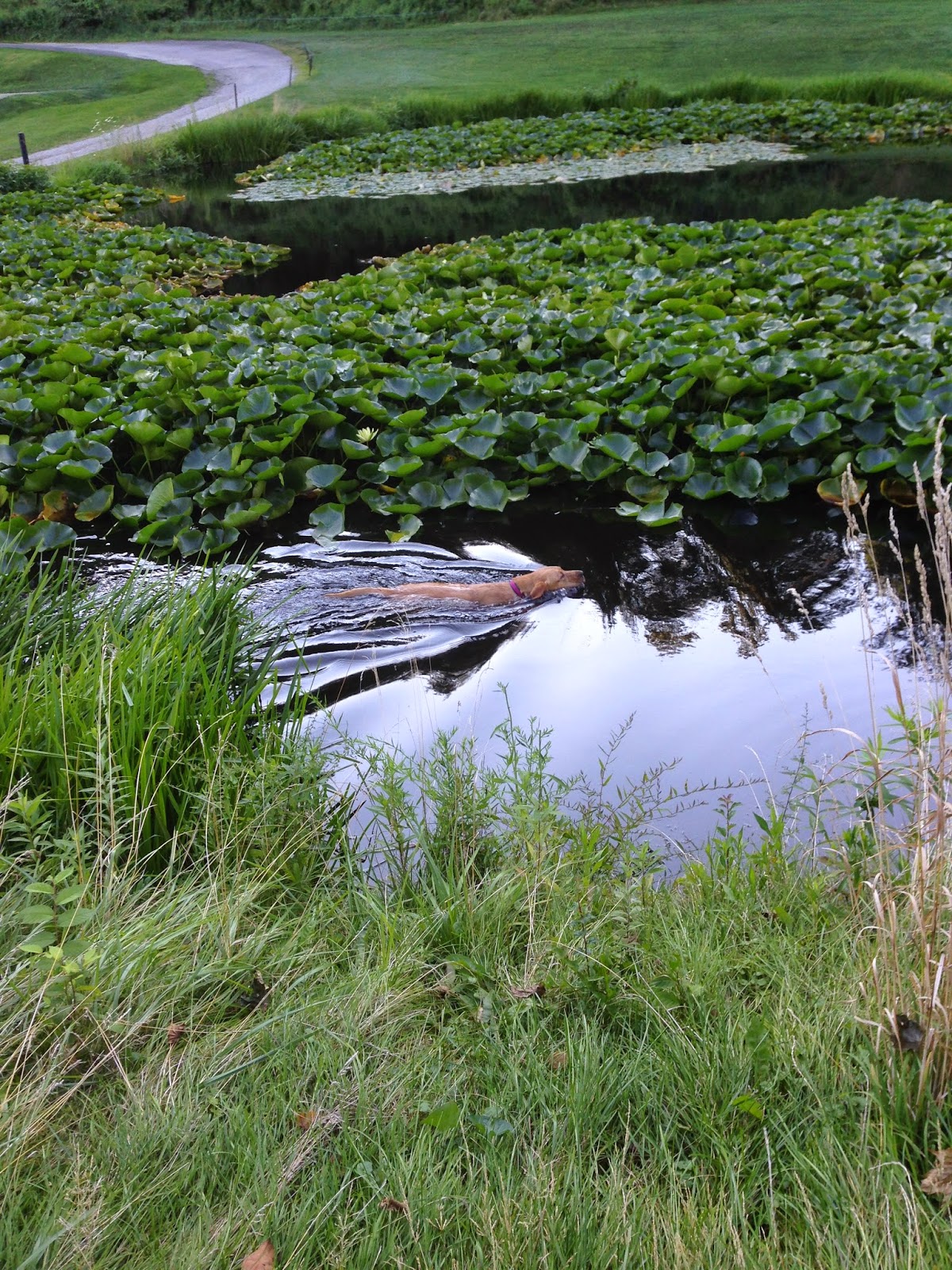 The nightcap even included Divot taking a dip after a long day!﻿
Posted by Corbin Blier at 7:54 PM No comments: 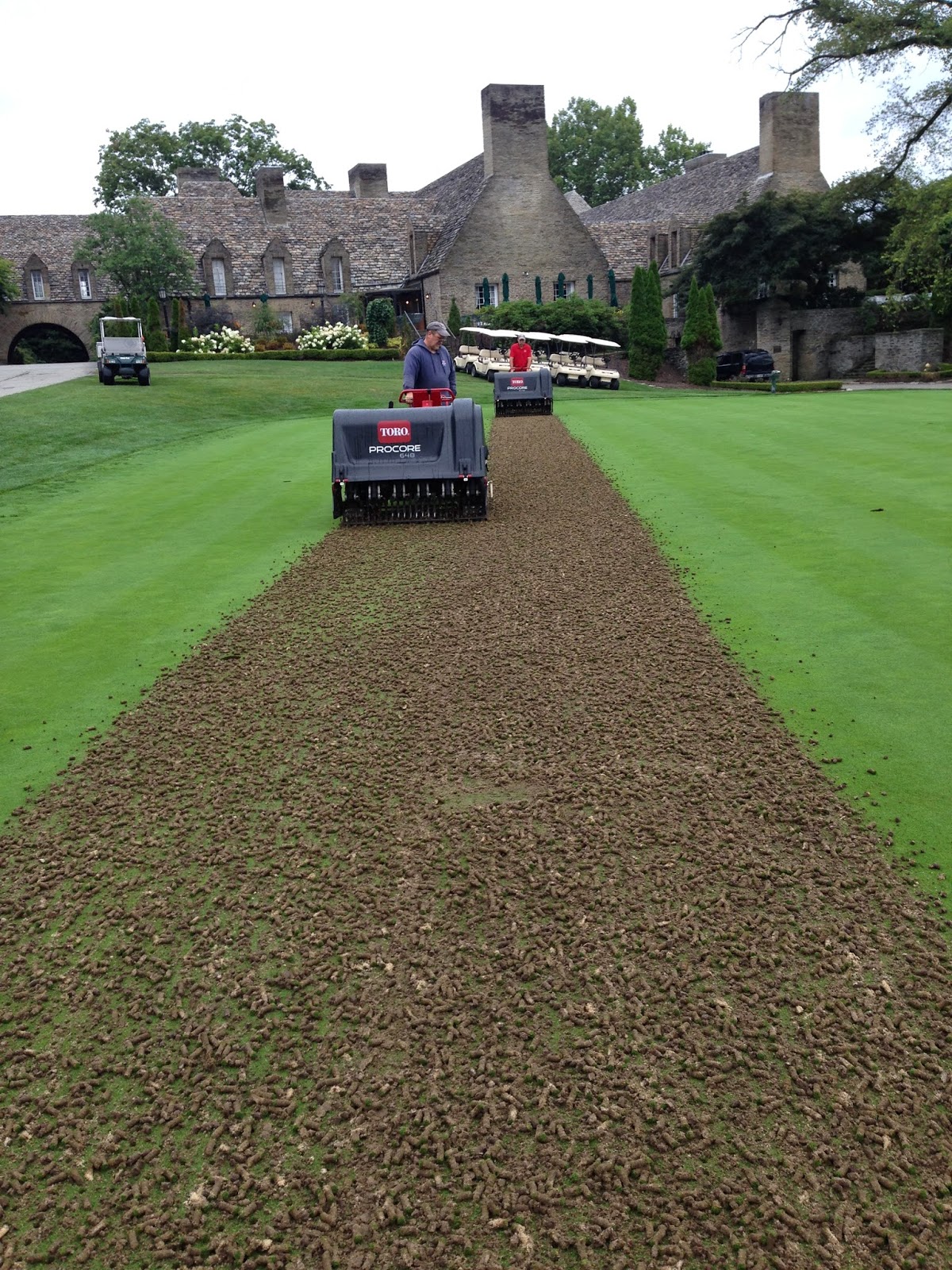 This post is going to short and sweet...my hats off to the staff, we wrapped up tees this morning and despite the morning showers started on greens just after 9:30am. 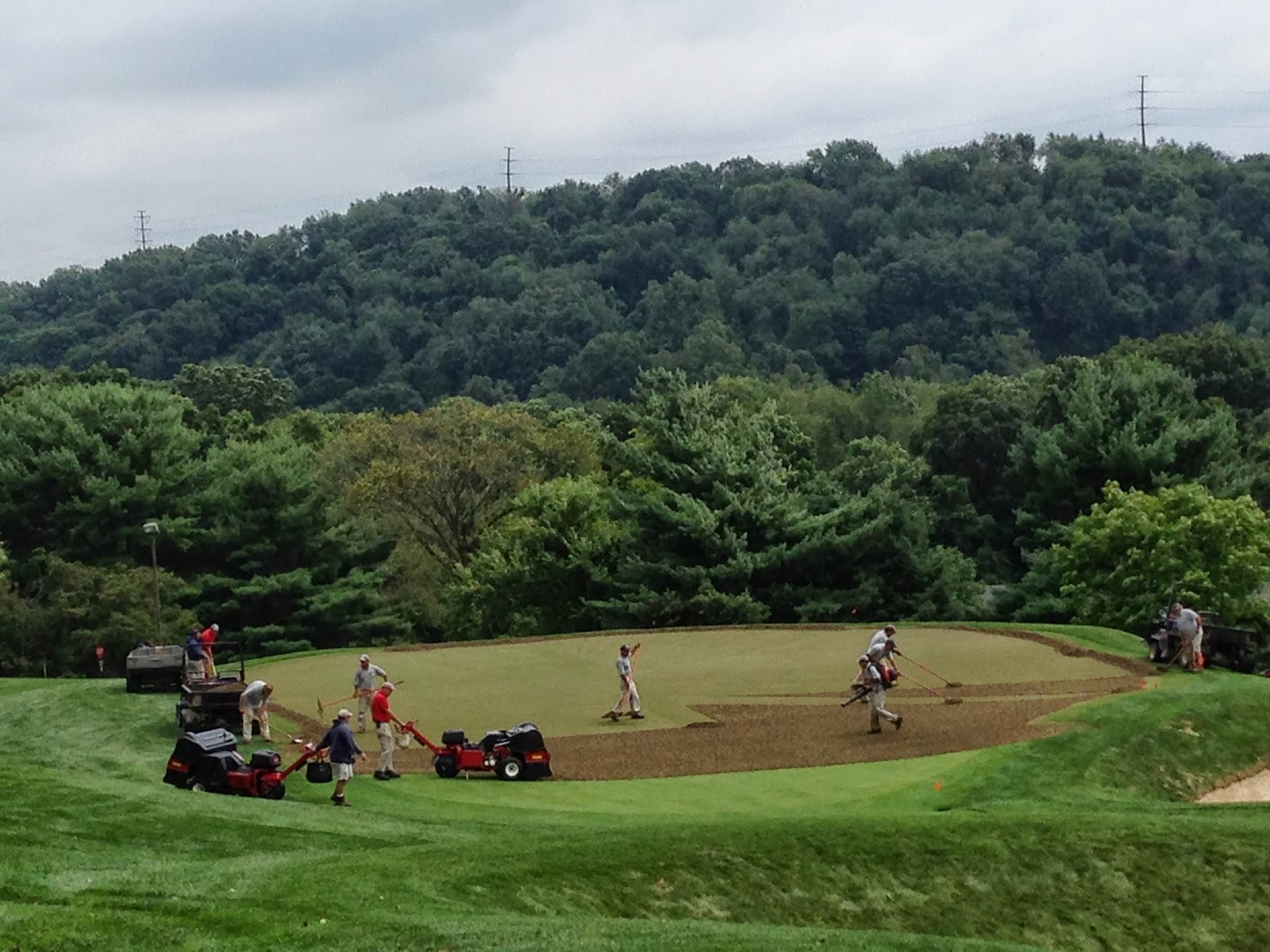 Pulling a 1/2 inch core on the tightest spacing, the team poked, removed and cleaned 16 greens today with just 15-18 remaining for the morning.

On to topdressing tees and greens tomorrow and starting to repair bunkers after close to 2 inches of rain since Monday.

Again Thank you for your support and cooperation this week!

Posted by Corbin Blier at 8:51 PM No comments: 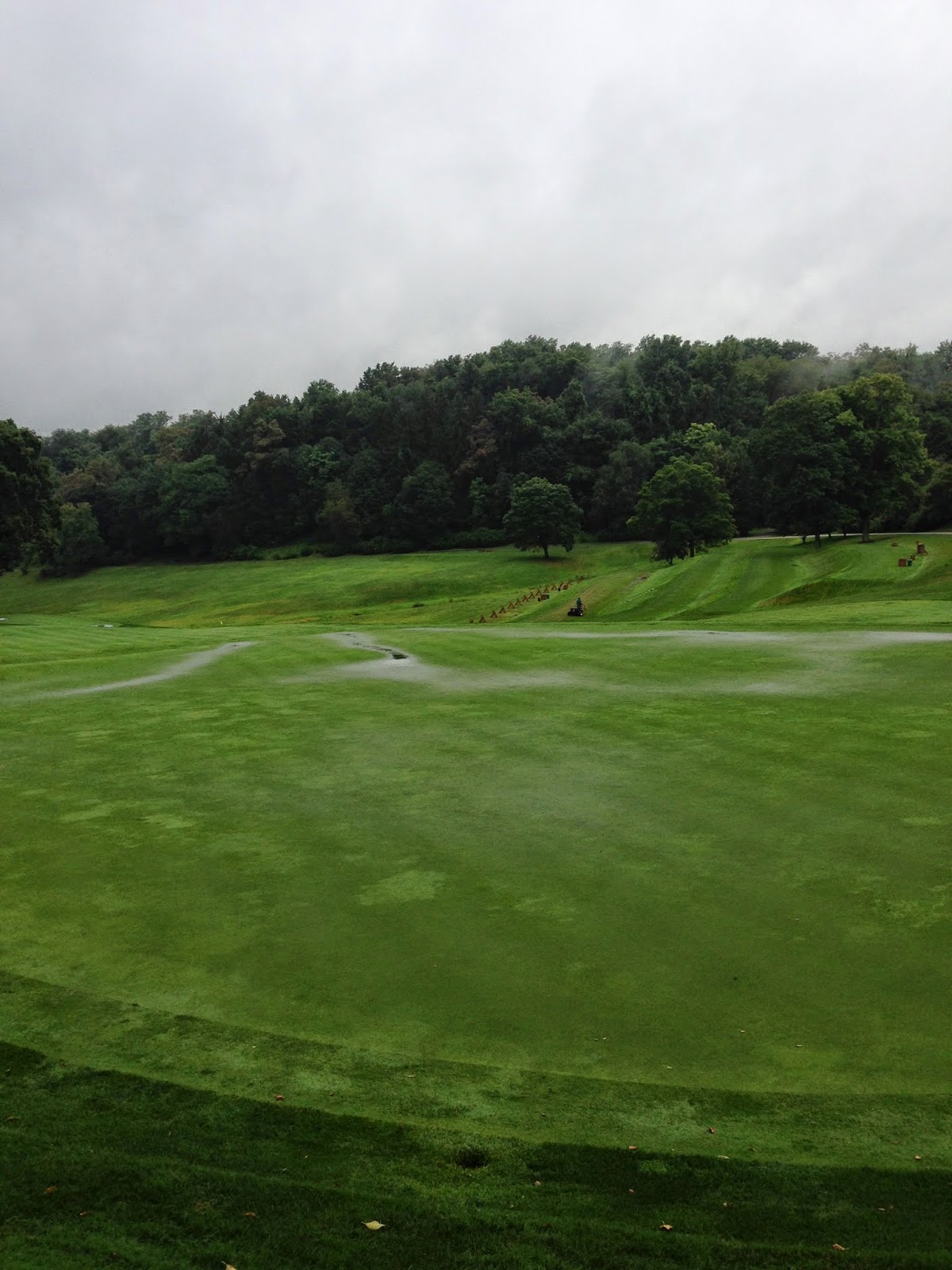 Not quite the start to Aerification that I was looking for, but in my first 18 months as Superintendent at Longue Vue....I've come accustom to a few givens.  The biggest is that Mother Nature like Brooke, always wins!

The course took on just over 1/2 inch of rain from yesterday and overnight, we then had a strong line that passed through this morning dropping 3 tenths of hard soaking rain that has left the place extremely saturated.

Nonetheless, the show must go on! 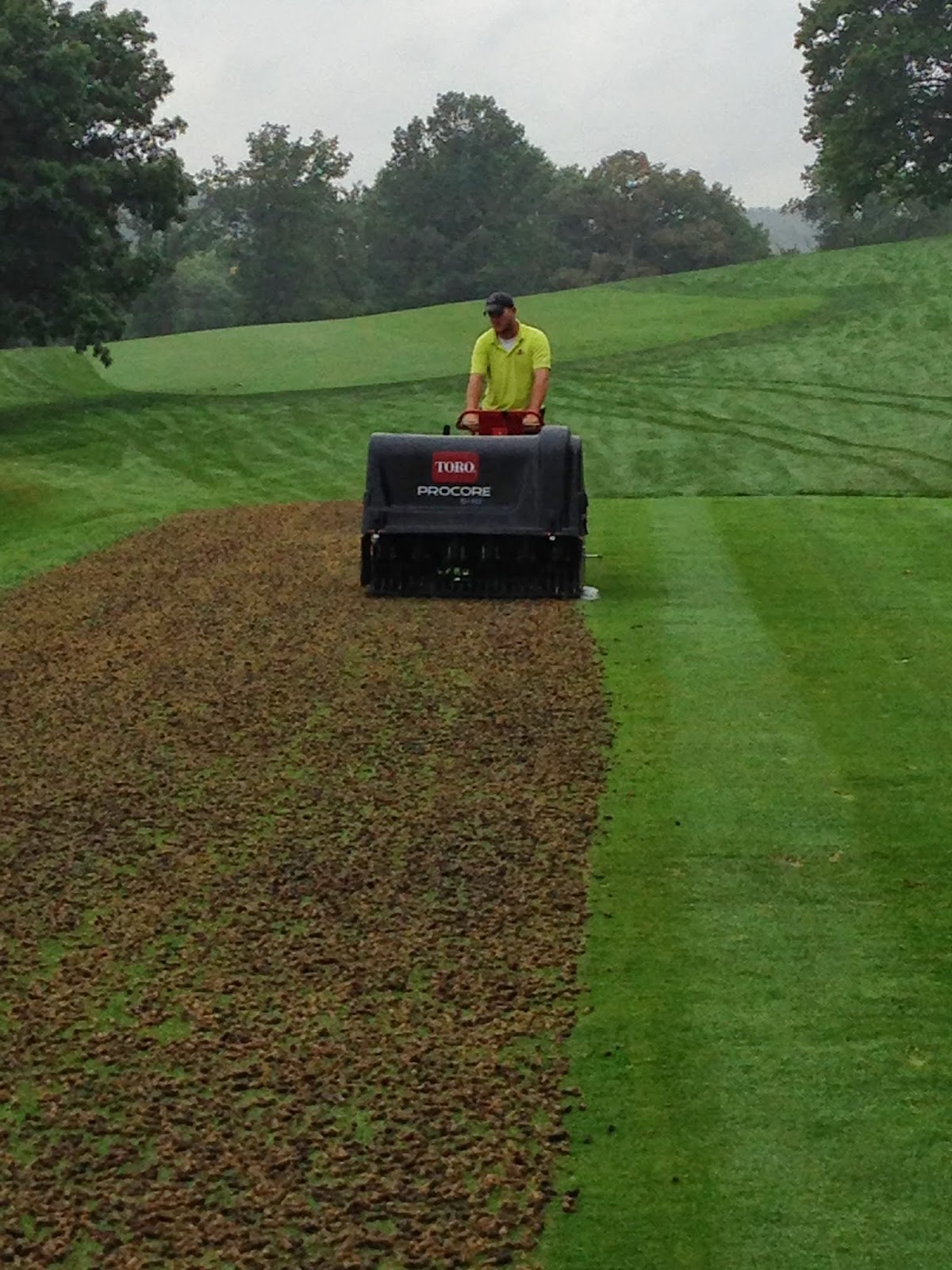 I called an audible this morning and decided to start with tees as opposed to greens.  Multiple factors lead to this decision, but mainly the ability of pulling a core on the non-XGD greens was out of question, therefore we are going to work on tees throughout the day with the hopes of finishing them up tomorrow around mid-morning and then get started on the XGD greens after lunch.

The process of tees begin with verti-cutting and grooming followed pulling a 1/2 inch core on a 1.5 inch spacing.  The tees really needed to be treated aggressively this Aeration due to not pulling cores this past spring with the tee restoration project.  Following clean-up, we will start topdressing all tees Thursday morning and will probably have to hold off on amending till Monday so we can focus on greens the rest of the week.

Stay tuned to the blog over the next couple of days for updates, on behalf of the entire Greens Department, Thank you for giving us the golf course for the rest of the week to conduct such a valuable practice towards our success.