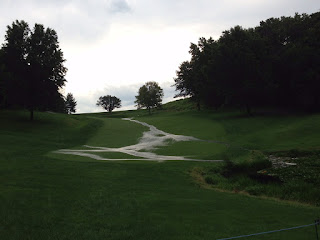 This has been a common theme since my last post a little over a month ago.  In fact,  we have recorded measurable rainfall on 22 of the last 37 days since I sat down to update everyone on the happenings of the course.  Records have been set across the region for above average rainfall in June and even the start of July on what has been an extremely wet start to the summer.  In the days leading into the Robert White Invitational, it rained 7 out of the 8 days totaling over 6 inches.  Since then, 13 rain events have prevented the course from drying out and has provided some trying times for the greens staff.

The game-plan or blue print from a maintenance standpoint was completely thrown out the window as applications were altered, mowing practices changed and hours sky rocketed just to stay caught-up with conditions while providing a commodity for events and outings on a weekly basis.  Mowing and Bunkers are the biggest challenges when you go through periods like this and finding the time to complete everything in a manor of respecting play is almost impossible. 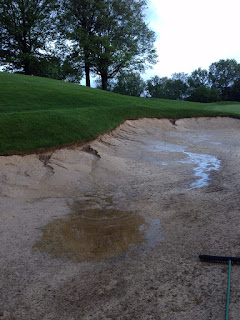 On a daily basis, the first thought process was to get the golf course playable; which meant repairing bunkers (sometimes twice in one day) and putting a cut on playing surfaces without posing to much mechanical injury to the turf.  We went a week without cutting fairways following the Robert White and on two occasions throughout the past month we expanded on our normal push mowing routine to cut the rough in areas just to make the course somewhat playable (See below) because the big equipment couldn't get out.﻿ 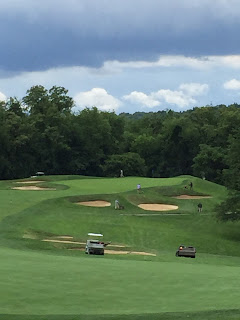 With saturated conditions comes damage from equipment and golf carts.  For the most part, we used measures to keep equipment off of certain areas and golf cart traffic damage to a minimal.  Despite the countless feet of rope and directional signs, damage still occurred. 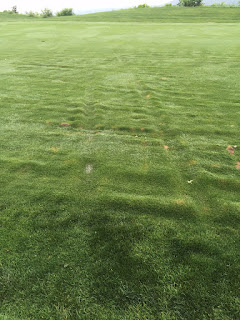 Ruts occurred in areas that were clearly marked throughout the property and on multiple occasions a week, the staff spent time repairing the damage. 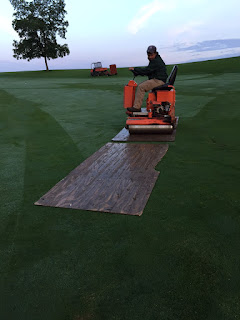 Plywood and our greens roller were used to smooth out the imperfections made from traffic to allow our fairway mowers to cut without scalping or creating even more ruts.﻿ 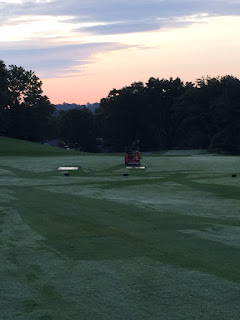 We have done our best to route the traffic, but damage happened both before and after directional signs.﻿ 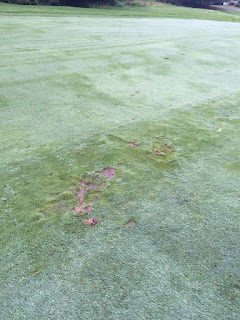 ﻿
Unfortunately, some damage has left scars and will take some time to heal.  It was a tough decision on a daily basis to allow or prevent carts, a call I never like to make because of the impact on your lives and the fiscal impact of the club; but there were days that it just wasn't possible.  For the record, I'm not pointing the finger completely at cart traffic, some damage was inevitable from equipment simply to repair and maintain over the past month in Bleaksburgh.

We are very fortunate to have XGD drainage in 17 of our 19 greens on property.  With the events that have transpired over the past month including Member/Guests and Club Championships we were still able to provided respectable putting surfaces despite the impact of weather.  Very minimal damage has occurred on greens despite the traffic (and abuse from me for that matter) under wet conditions.  The putting green has received the brunt of the damage and that could be expected because of the lack of drainage and size of the green to facilitate the amount of traffic on a given day.  Oddly enough, the putting green is the smallest green on the course but receives the most traffic  because of those warming-up prior to a round or those that venture out to work on their putting stroke.  A progression of decline over the past week has lead me to seek approval from the Greens and Golf committee to close the putting green for 7-10 days. 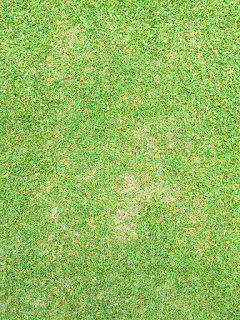 The start of thinning was noticed on the Monday following July 4th. 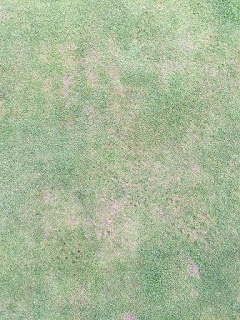 A week later, 2 inches of rain later and a club championship later the areas were spreading despite the changes I made in our practices. 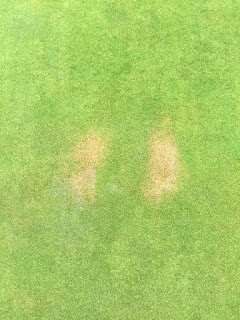 Footprints from working on those 5 footers 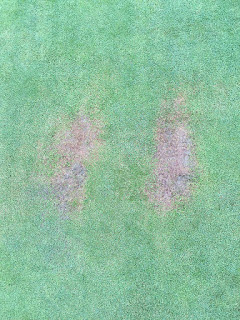 Same footprints, 4 days later.
I'll leave the putting tips to the pros, but here is a tip from a grass grower.  Mix up your angles when working on those 3-5 footers, draw an imaginary circle around the cup on the distances that you want to work on and constantly move on that circle to reduce the wear that your leaving on the putting surface.  Plus it gives you different reads, uphill/downhill putts and etc.  In return, we are both happy....you will not miss putts and the putting green will be happy, happy!
Yesterday,  we vented in multiple directions and topdressed the entire putting surface prior to roping off for some much needed rest. 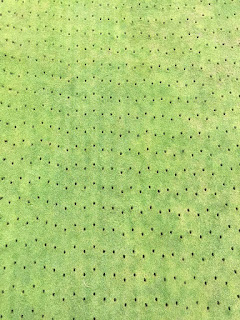 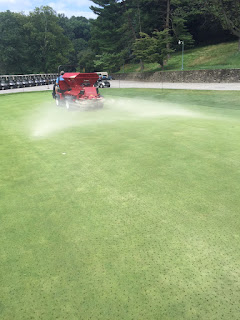 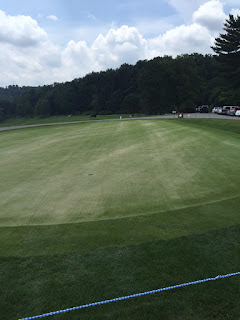 I apologize for the short term inconvenience, but with a busy couple of weeks coming up including the State Senior Amateur, this decision had to be made.  The short 9 chipping green located to the right of the main drive has been made available for your putting.  That green will be maintained throughout the 7-10 day stretch exactly like the greens on the course to provide consistency.

In closing, I have probably received more comments and compliments over the past 3 weeks about the job that myself and staff has done with this property. I can't take full credit, nothing would be possible with out the entire staff.  My hats off to everyone, especially the assistants, we have spent more time with each other during this stretch than our wives and family (I think they are growing pretty tired of me at this point) while trying to provide the conditions that you and your guests deserve despite what curveball Mother Nature throws at us!