﻿
The Practice Area Renovation that is a part of the 2nd Century Gifting Campaign was recently approved by the Board.  Work is slated to begin next week and I thought it would be a good idea to recap everyone on the project and the sequence of events during construction. 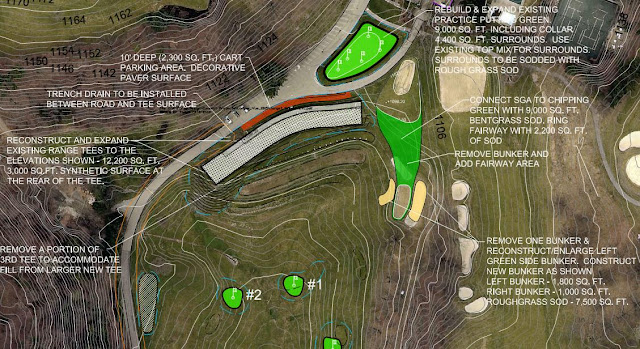 
Work will begin on the on creating the new Driving Range tee first.  The top three current tiers will be combined to form one large 12,200 sq ft tee with an additional 3,000 sq ft synthetic mat section located on the back side.  Prior to the project, our entire tee square footage was just over 20,000 sq ft.  In addition to the new tee, the bottom two tiers will remain and a portion of the third tier will still be available for use following the project.  This is important to note because of the additional sq ft of hitting space that this will provide in addition to the new tee and the existing tees will answer a lot of questions that the membership may have during the construction when it comes to range use.


The lower tiers will allow the range to be open once the pro shop chooses to open range for the season despite construction.  Use of the lower tees may be limited at times depending on weather, accessibility and contractor requests.  However, in the event of restricted use on the lower tiers, the short iron tee located along the drive across from the shield will be made available for the membership to get some early season practice time.


Getting back to the "contingency" square footage of the lower tiers.  I call it a contingency because the existing tee space will provide space for early and late season practice sessions while reducing damage to new tee for in-season use.  This will also allow us to monitor the new tee for a season.  The second phase of the project down the road would call for the remaining DR tee space to be combined and form a second lower tee.


The new 3,000 sq ft synthetic mat section will be a welcomed addition during outside parties, tournaments and inclement weather days.  25-30 stations will be made available on those days.  The area above the tees that we have used to stage carts will be regarded and drainage will be installed to improve on the past.


Construction on the tee will likely take 3-4 weeks depending on the weather.  Following completion, a few weeks will be needed to allow the sod to establish prior to use.  However, the mats will be made available at that point.  Goal is to have the grass portion of the new tee open and ready for play on the Opening SWAT weekend of May 5th.


Work on the putting green will begin following completion of the Driving Range Tee.  The new 9,000 sq ft putting green will double in size and will finally mimic our putting surfaces on the course.  The new surface will be cored and built to a modified USGA spec putting surface to replicate our native pushup surfaces.  Since Poa Annua is not an accessible sod, I've facilitated a lot of questions as to what I'm planning on doing.  Two years ago, I built a 10,000 sq ft nursery on #17 using the cores from aerification.  A combination of harvested sod from the existing putting surfaces and the nursery will be used to provide an identical surface for practicing.


During the construction, the short 9 will be made available for practice putting.  Following completion, which should take 2-3 weeks, an additional 2-3 week window will be needed for sod establishment prior to opening for use.  The goal is to have the putting green open for use during the week of Willie McKay.


This final phase will be the most problematic when it comes effecting member usage during construction.  Unfortunately, due the timing of the above mentioned scopes, the short 9 chipping green will be the only source of chipping and putting for a few weeks at the tail end of project.  A short term inconvenience with a long term gain!


Once construction begins next week, I plan on giving weekly updates on the progress.  So stay tuned, it's an exciting time at the Vue and a promising start to the 2018 season!