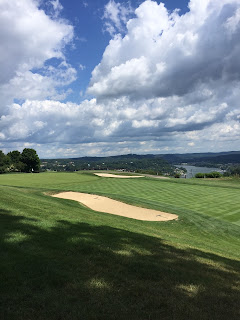 It has been quite the stretch for the Greens department over the past 6 weeks.  Since the beginning of June; we have endured a busy schedule with events, unseasonable temps, and have been placed on a moderate drought.  With that being said, I have to apology for my lack of posts and will do my best to bring everyone up to speed on the happenings on and around the course.
Weather 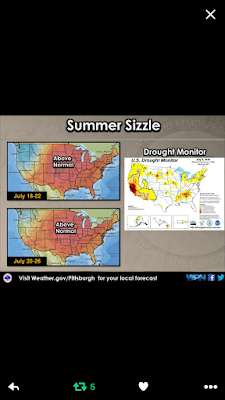 As mentioned, we have been experiencing abnormal weather conditions over the recent weeks.  Since the storms that hampered the Thursday of US Open week, we have only received .75 of an inch of rain spaced out over the past month resulting in the National Weather Service to recently place our area under a moderate drought.  In combination with the lack of rain, we have been experiencing an extend period of higher temperatures with no end in sight.  At this point of the summer, we have already surpassed the amount of days in the 90s compared to last year and with the extended forecast, we will easily pass the last two summers combined.  Obviously we have been out in full force with handwatering and I wanted to thank everyone for their continued respect of the staff as they are conducting these tasks.
Course Conditions 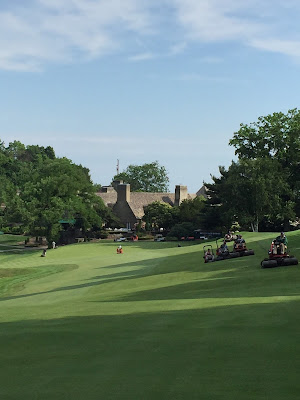 Overall, the course and health of the turf for that matter is solid despite the before mentioned conditions and amount of events.  A few dinged up areas are exhibited due to localized dry spot or lack of irrigation.  The greens continue to be the breadwinner thru all the stresses of having my foot down since post "rained-out" McKay in late May.  Just a few small areas of self inflicted Anthracnose have been identified on the knobs of 9,14 and 18 due to low mowing heights and frequency of cut.  With the West Penn Open less than a week away, the putting surfaces will receive a much needed reprieve following the event.  On July 25th, we will vent and topdress them for the first time in two months.
I am continuing to seeing great results in the new growth regulator program on fairways to promote the bentgrass.  As mentioned in countless posts, reducing the Poa population will improve playability, reduce water/fertility input and lower disease pressure.  More on this in the upcoming weeks as I'm hoping approval to start inter-seeding bent into #1 fairway, our weakest link.  Approaches and Tees continue to be strong and healthy while achieving new lows in height of cut.  Rough, much like every year, is starting to see the ill effects from the lack of rainfall in non-irrigated areas, but the perimeters of each fairway remain strong, dense and healthy.

A great deal of work was placed into bunkers prior to Robert White and following US Open week.  Sand was pushed and redistributed to reduce the penal nature of the edges.  Once completed, new sand was then brought in to fill the voids while maintaining an consistent depth throughout the bottoms. 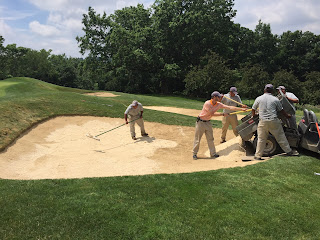 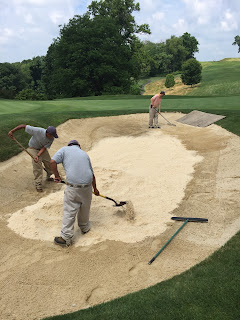 We also altered how we maintain our grassed faces.  In the past, we would string trim the faces to prevent rutting from pushmowing.  However, the string trimming has started to take its toll on the turf with poor.  Therefore, we started using a fly mow.  This mower uses air circulated by the engine to hover across the surface.  Tough to operate but providing much better results. 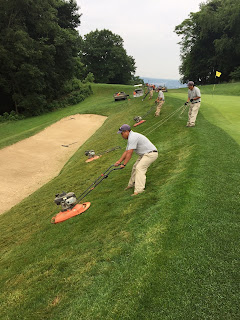 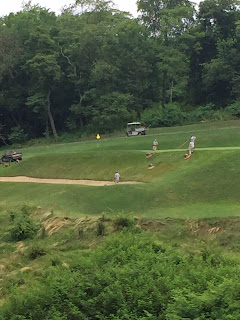 Odds and Ends
A few projects have been completed since my last post.
We completed a new "smoker's patio" just before June adjacent the Men's Locker Room. 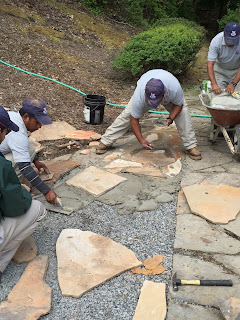 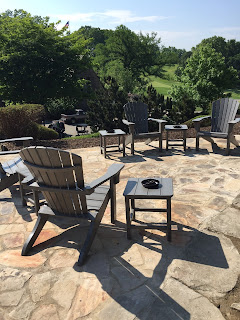 We mulched around the azaleas and rhodies along the main drive to clean-up the entrance. 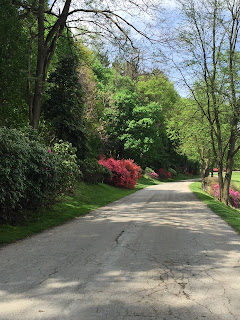 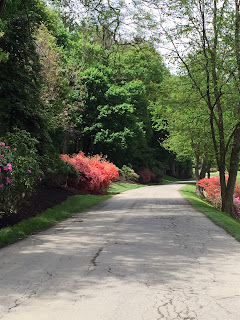 We experienced quite a few irrigation issues towards the end of June.  We had been have trouble with out booster pump that helps feed the top of the hill (Holes 1,2,3), while having someone in to work on it a rush of water creating a hammer effect was sent from the top of the hill thru the rest of the course creating some leaks at some weak points.  It happens, just not sure I've ever experienced that many in that short of time. 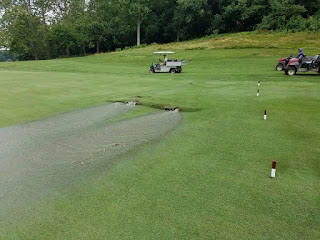 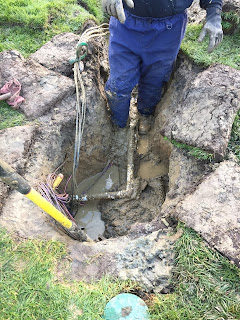 Finally Carts.....
I know that I sound like a broken record when it comes to carts but I wanted to share some photos and a video of what I've witness thus far into the season. 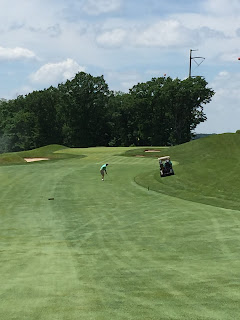 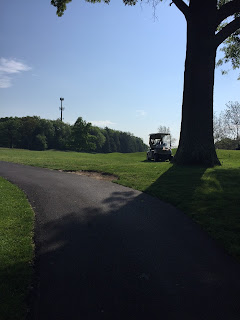 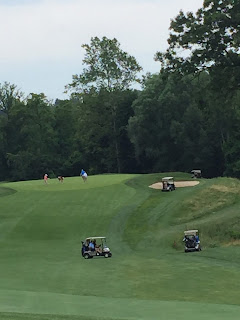 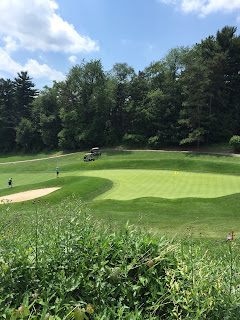 Another example of the path just being to far of a walk to the green.
You have probably noticed the increase amount of signs, rope and stakes at the gold tee on #8; well turf health isn't the only thing we are trying to protect...how bout your safety!
Again, I'm sounding like a broken record but it is important for everyone to realize that directional signs and marked off areas aren't just for when it's wet.  Under current conditions protecting the turf includes the stresses of cart traffic and that's why we direct traffic the way we to do...to protect your asset!
In closing, I hope this brings everyone up to speed and again I apologize for the delayed posting.  We are halfway thru the season and the schedule of events are becoming more favorable.  I'm excited with where we are and moving forward for the remainder of the season.  Thank you for all your support and cooperation.  I look forward to seeing you on the course!
﻿
﻿
﻿
Posted by Corbin Blier at 1:32 PM No comments:
Newer Posts Older Posts Home
Subscribe to: Posts (Atom)