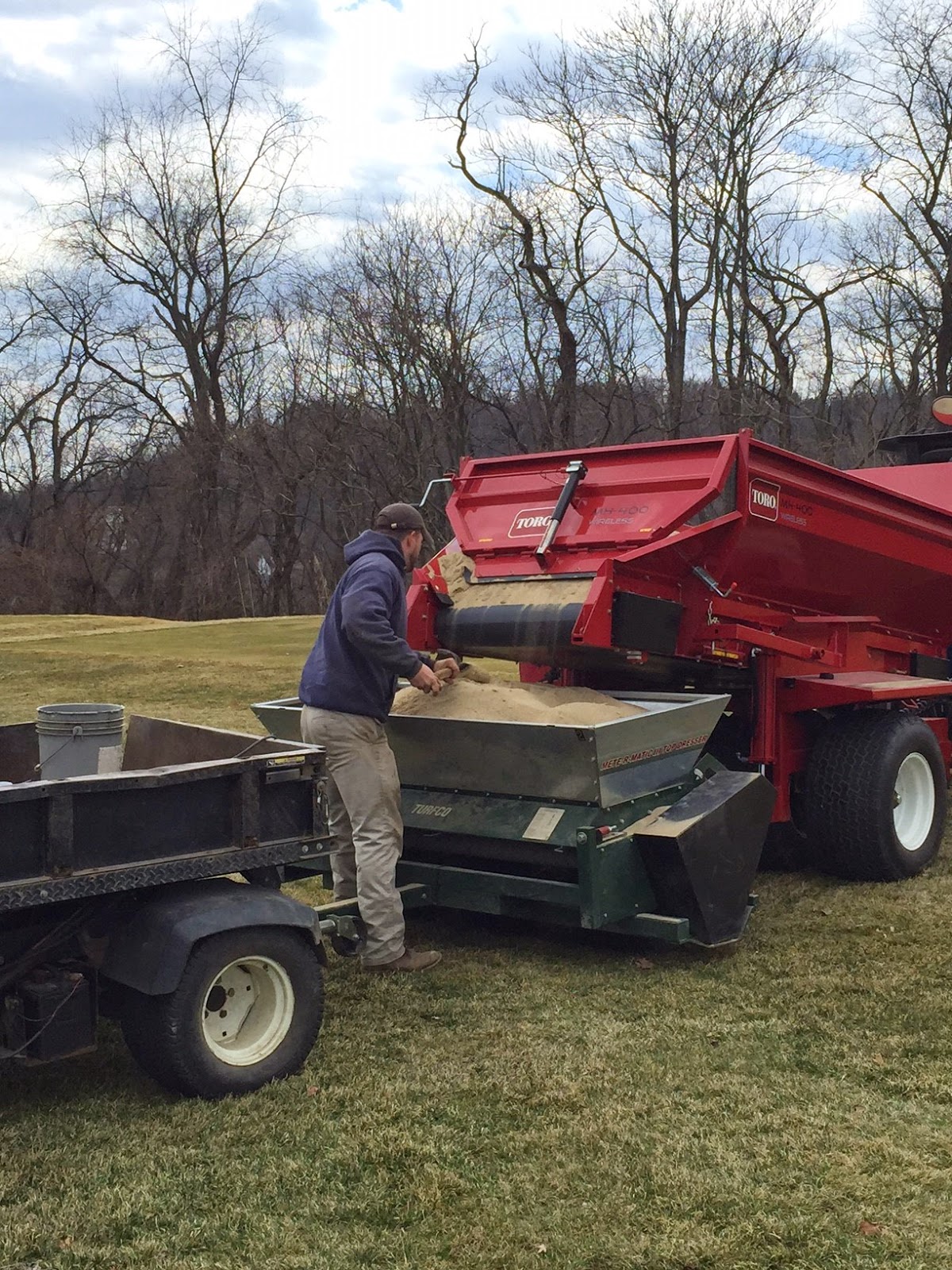 Yet another solid performance by the staff as all greens were completed last night shortly after dinner despite a lengthy frost delay in the morning.  We began topdressing around lunch and all that remains today is holes 6-10 and we can put a stamp on Spring greens aerification. 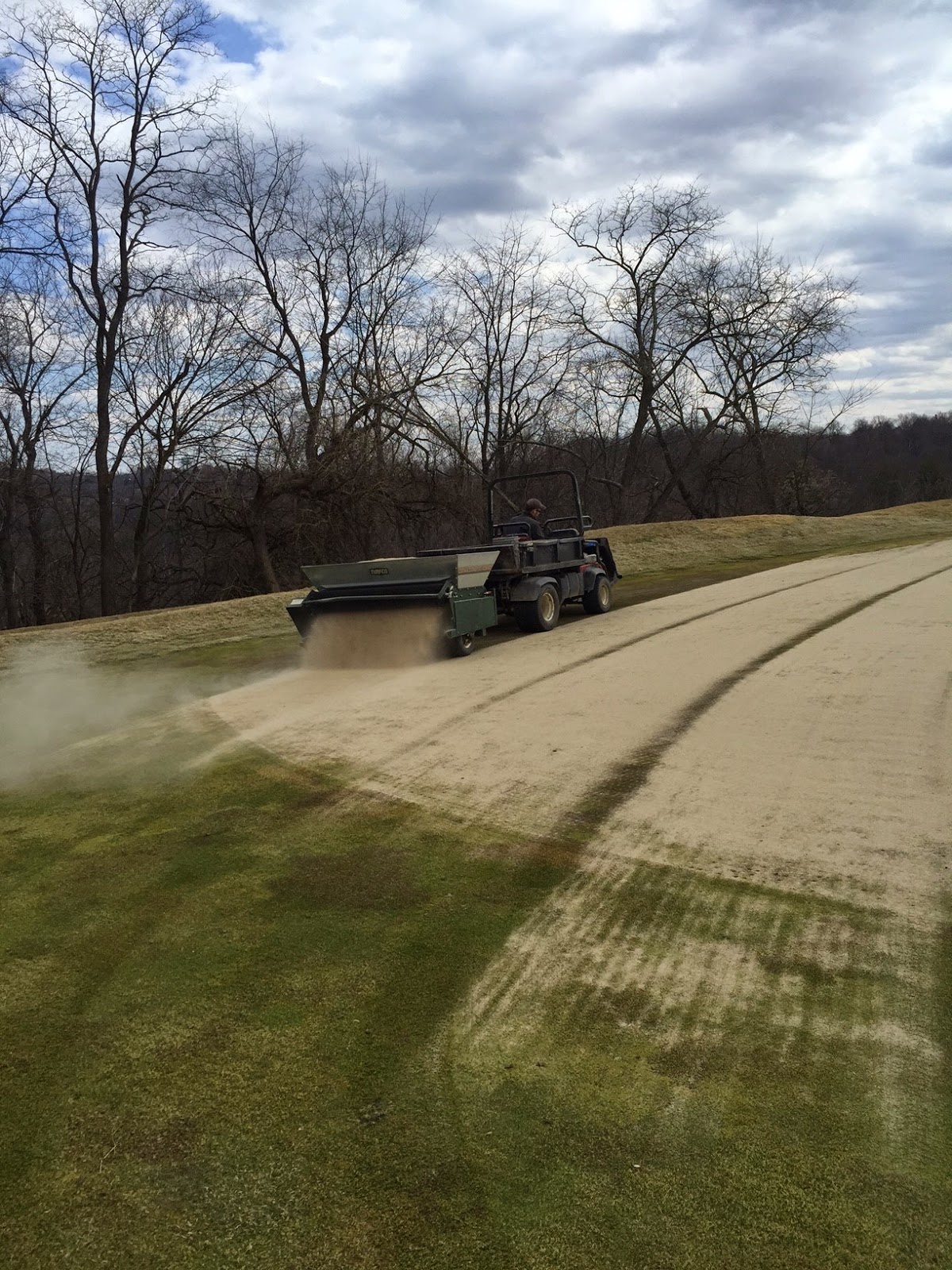 Topdressing, although a short term inconvenience for play, is a vital role in the success of our putting surfaces.  Over 66 tons of sand (roughly 750 lbs per 1,000 sq ft) is applied to aid in firmness, playability and improving the soil profile.  Once complete, the green is drug in with a pull behind mat to move the sand particles into the holes. 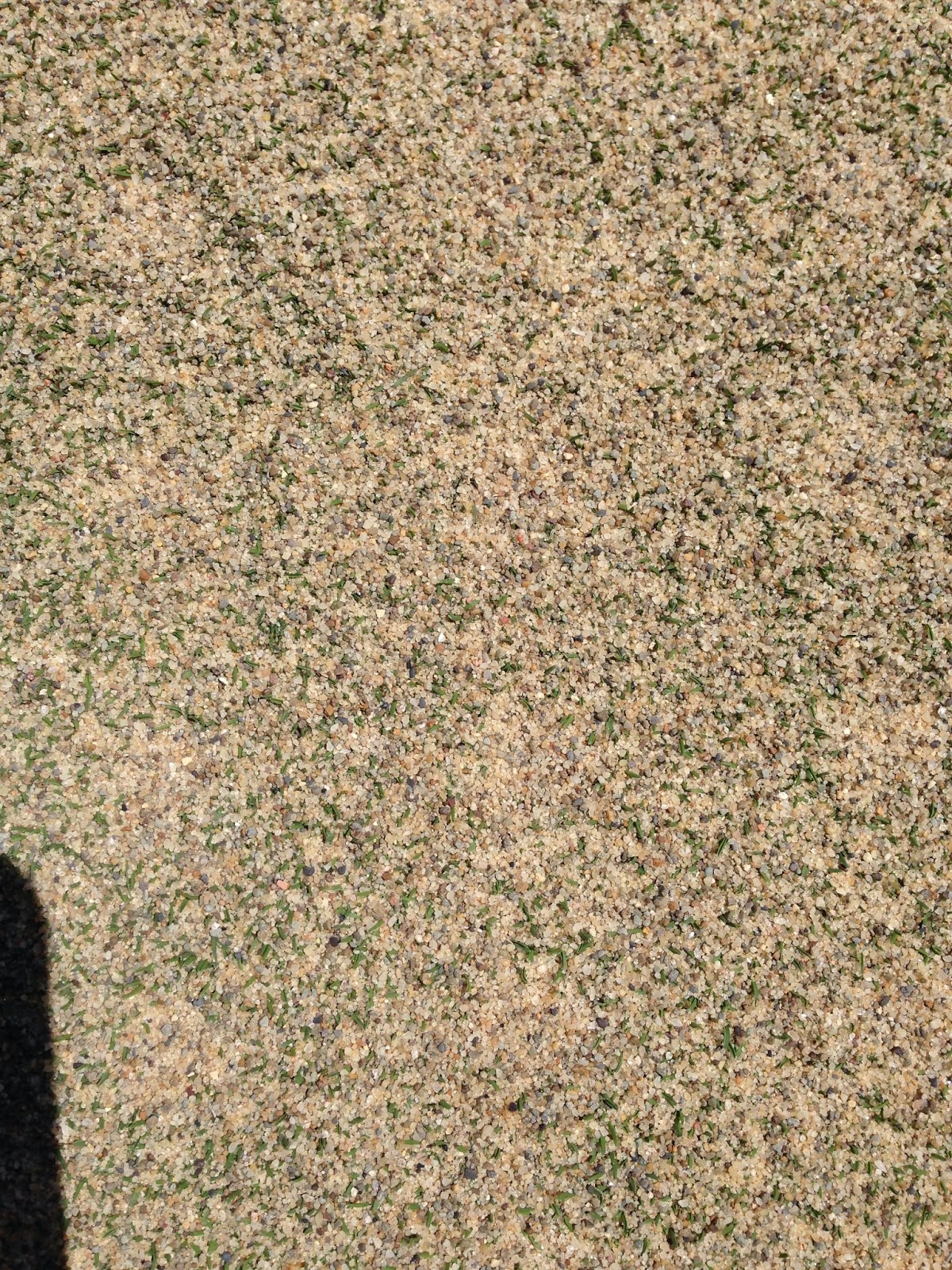 #5 Green
Due to concerns of heaving the sod on the renovated #5 green, we used different means of cultural practices outside of pulling cores like the other greens. 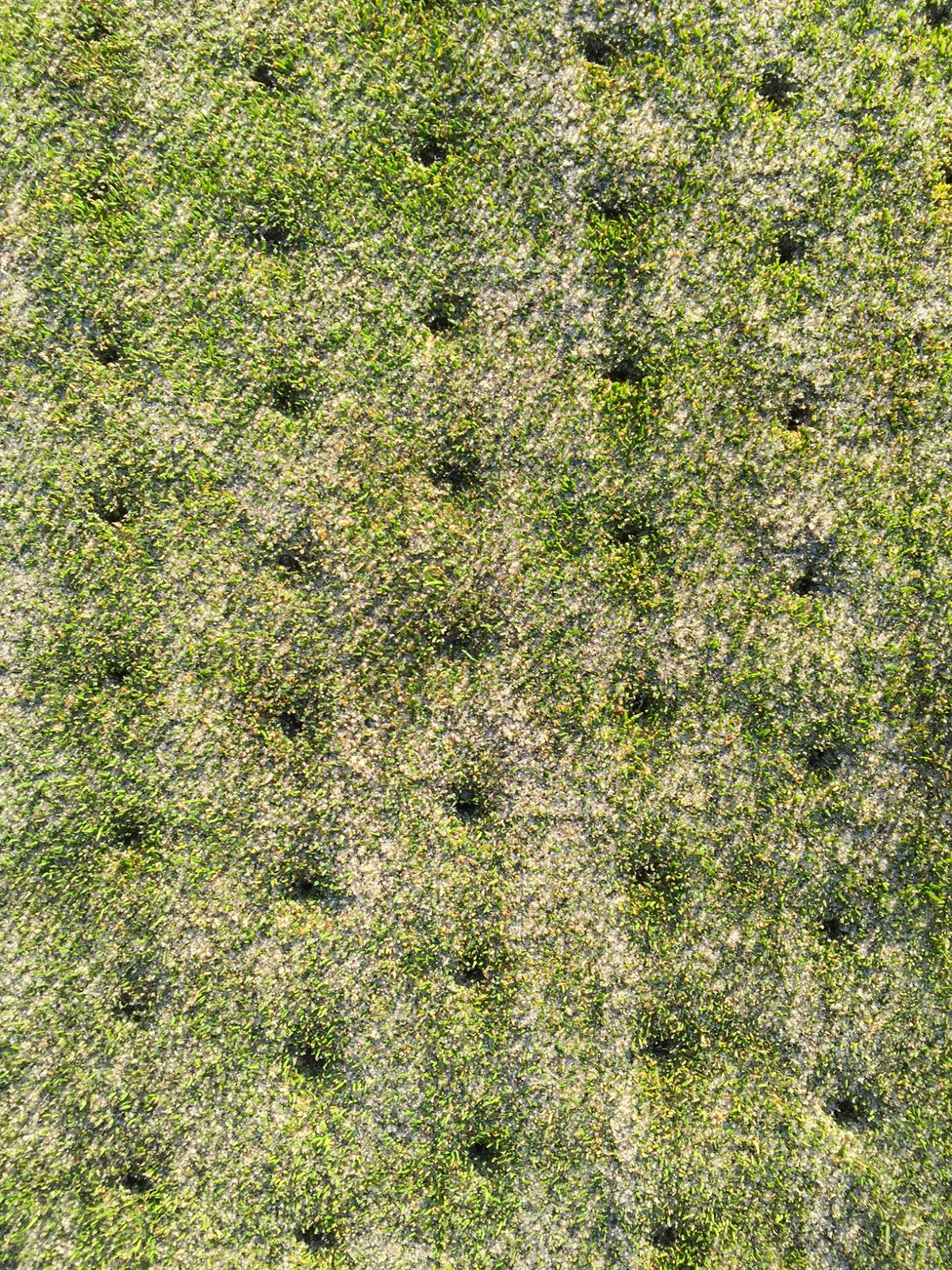 We used a 3/8 inch solid tine to poke holes at a inch and half spacing.  This method was far less aggressive on the shallow rooted sod from the project completed late last fall. 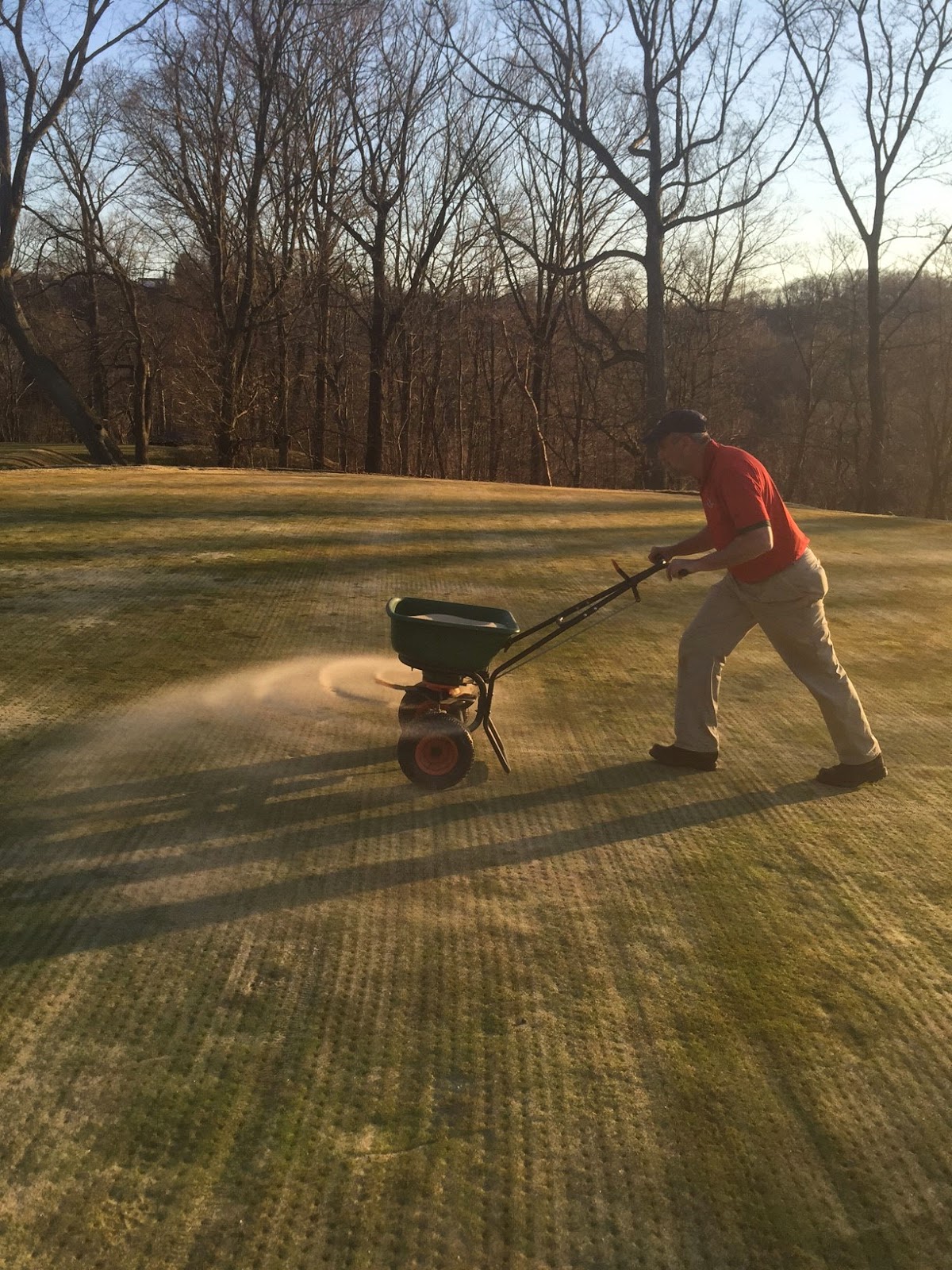 Next, to avoid the weight and traffic of the pull behind topdresser, we applied over 3,000 lbs of sand by hand with a walk behind speader. Finally, a roller was used to work any imperfections created during the entire process.
Overall, I'm very pleased with the progress of the recovery from the renovation process.  With limited rooting capabilities due to the timing of completion last November, the practices used over the winter and this early Spring have helped expedite the process.  However, there are still some areas that needs to be addressed resulting in the delay of opening the putting surface.  Again (and I know I sound like a broken record), we need prolonged warmer temperatures to help in the establishment and recovery.
The false front is still unstable under foot.  Constant foot traffic will delay the process and can pose as safety concern.  From a playability standpoint, the seams created from laying the sod are still lingering in certain spots.  As the putting surface starts to grow, these seams will quickly fill in.
With that being said, the green will now have a new target opening day centered around opening events.  The additional time will allow me to conduct various practices to improving rooting and playability prior to hustle and bustle of the season.  A temporary green will now be created in the approach of the 5th for the next couple of weeks.
I apologize for this short term inconvenience but want to ensure the health and playability of the surface throughout the entire season once the very first putt is holed.
﻿
﻿
Posted by Corbin Blier at 8:19 AM